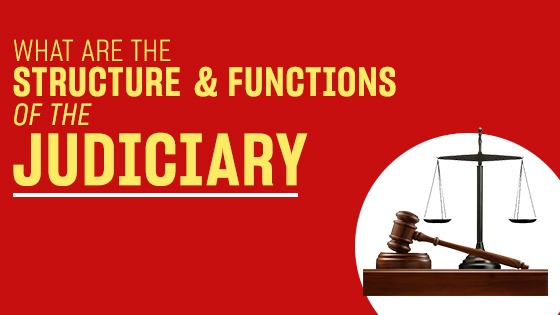 What are the structures and functions of the judiciary?

Indian administration is guided by three the pillars – Legislature, Executives, and Judiciary. In India, we have an independent judicial system. The other pillar of the government cannot intervene with the function of the judiciary. Here, PLA provide you all the details or relevant facts about the structure and functions of the Judiciary.

Indian judiciary is known as the watchdog of democracy which is also called the guardian of Indian Constitution that illuminates the law, settles disputes and administers justice to all citizens.

India has a single integrated judicial system. The judiciary in India has a pyramidal structure such as -

1. The Supreme Court (SC) - placed at the topmost of the hierarchical position.

2. High Courts - in the regional level.

To commissioning of power and make use of the same for the people of India.

The functions of the judiciary in India:

If you wish to become a part of Indian Judicial System then you have clear Indian Judiciary exam. It has two entry levels namely – Higher Judiciary and Lower Judiciary. Here, Pahuja Law Academy has come up with the complete exam preparation for the convenience of our aspirants. Wherein, we provide three options to our aspirants as –

2. Online – Daily Live Classes Program + Recorded Lectures: Students can get access of Live Online Classes + recorded lecture for the same. We provide study material in hard copies & PDFs format to finish their course of Live Lectures in duration of 14 months.

3. Online – Recorded + Live Doubt Classes Program: To understand the problem of working professionals and housewives who are not able to join both the above program, they can get access of our online - Recorded + Live Doubt Classes Program. Here you can get all the facilities such as study material in hard copies + PDFs format will be provided to finish their entire course in 12 months of duration.

Here are some additional facilities given below which are provided for our all students.

In addition, we provide the latest landmark judgments, case laws and monthly current affairs magazines regularly to cover the general awareness part to get sure selection.